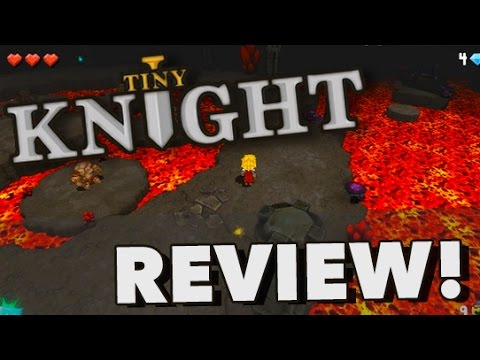 Welcome back to GTR as Mark and Liam review a fun little indie game; Tiny Knight!

We first found Tiny Knight on Steam for quite a low price of around £5, which is roughly $7. In Tiny Knight you play as a little hero who lives in a peaceful village until it comes under attack on a dark night. After seeing your village destroyed, you set out on an adventure to stop the mysterious attacker from wreaking havoc upon the rest of the world. The game sees you travel through dense forests, navigate caverns and dungeons and cross snowy peaks to get to the end of each level, encountering numerous boss fights on the way.

Talking about the different environments, as you can see the beautiful art style has a nice cartoony, Borderlands-esq feel to it, but since you can all see the graphics, so we won’t dwell on how it looks.

So the first couple of levels, (there’s 16 in total) are quite easy, and is quite nice because it gives you chance to get used to the controls and feel of the game, including the sensitivity. After you get past level 4, the game starts to get a lot harder – there’s little transition between the difficulty which means that whilst you’ll die a lot, you’ll inevitably learn strategies to the kill enemies and bosses, making further progress in the game a lot easier.

And whilst the combat gets a little repetitive after a while, that’s to be expected from games of this nature – you can either stab the enemy or jump on its head in a very Mario-like fashion. Across all 16 levels you can only unlock 3 swords and even when you’re using them they don’t really give you any sense of accomplishment and since apparently jumping on the enemies’ head does more damage than slicing them with a sword, it doesn’t really give you any desire to unlock the next.

However saying this the one main problem we have with this game is the lack of backstory and narration. With no cut scenes or even narration from your own it’s hard to relate to the character or even anything happening, which contributes to the repetitiveness of both the combat and level structure – the only thing which makes each level feel different is the environments. With a poorly portrayed story, it gives you no desire to kill the enemies apart from the fact that they’re running towards you.

Although to be fair the game is classed as ‘casual’, meaning you can just pick it up anywhere, anytime and play, and that’s what this game is. Each level takes no longer than about 15minutes and allows you to just start the game and play in a very nostalgic fashion. The game does feel very Borderland and very legend-of-zelda-esq, encouraging you to collect gems, but with less of the storyline. And like I’ve mentioned before, certain games tend to focus solely on gameplay over narration, and that’s fine, but it just doesn’t particularly work for Tiny Knight. Maybe a little bit more narration would’ve made us feel more inclined to carry on, or even a reason as to why we were facing a particular boss. But without them, the game felt pretty repetitive, pretty quickly.

So overall, although the gameplay can be fun, the excitement you get from the game is ruined by the lack of emotion felt for the characters and the plot in general, giving you little incentive to carry on. I know we’ve given this game a lot of hate, but it must be said that this is a casual game, and although there’s little narration, it is easy to just pick up where you left off, so although you may not be that inclined to complete the game in one sitting, if you’re a casual gamer who wants to play a nice simple game without having to get too invested into the storyline, this game would better suit you. The everyday gamer probably wouldn’t enjoy this game too much, but for those of you looking for a nice laid back game, then I would recommend it. So overall, taking the graphics, narration and most importantly the gameplay into account, we will be rating this game 60%.

We hope you enjoyed this video, and if you did, make sure you subscribe to GTR for more awesome funny content, game reviews and gaming updates, all here on our Game Time Reviews YouTube channel:
SUBSCRIBE: