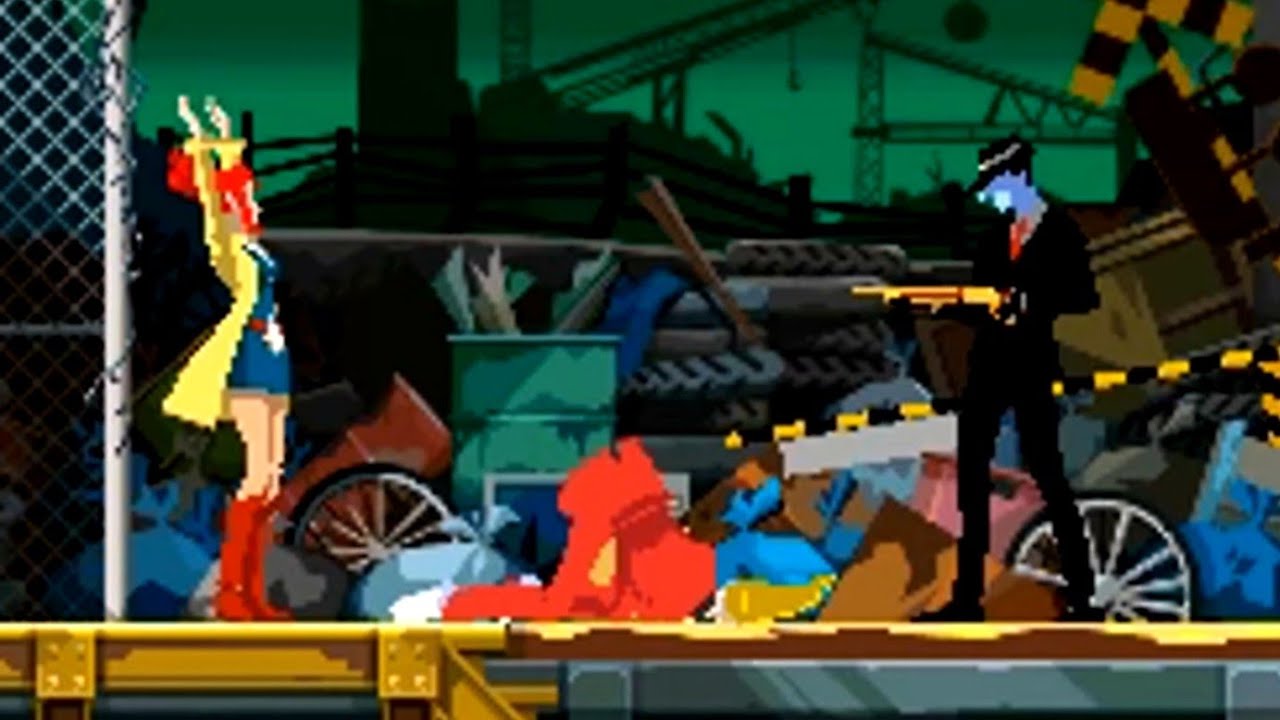 I know that it’s no longer Halloween, but I didn’t want to sit on this one until next year. It’s just too good of a game not to share, so here’s a bit more Halloween-y fun for anyone who wants it!

Ghost Trick is an adventure game by Shu Takumi, the creative genius behind Ace Attorney games, and it feels like it. They’re quite different in terms of gameplay, but both rely on excellent writing, clever puzzles, and expressive art styles instead of on fast reflexes.

However, Ghost Trick isn’t quite a visual novel like Phoenix Wright is. The story is on-point and the writing is generally stellar throughout, but the game requires you to think quite a bit more than its lawyering cousin ever did.

You play as a man named Sissel. Or rather, his spirit. You see, Ghost Trick opens in the wake of your murder.

As you “awaken” and see yourself slumped, face down, in the mud, it quickly becomes apparent that you are no longer among the living. Rather, your spirit leaves your body and remains intact and aware, albeit unable to remember anything about yourself or your life, and thanks to a helpful desk lamp, you soon find that your recent passing has imbued you with some special abilities, or “ghost trick[s].”

The first is that Sissel’s spirit can leap to any object close enough for his spirit tether to reach, and many objects can be manipulated when they are inhabited – you can jump into a see-saw and make it rock back and forth, or you can possess a blind to make it open and close – there are tons of possibilities. And by interacting with objects in this way, Sissel can manipulate people’s interactions with their environment.

The second is that by jumping into the body of any recently deceased being, Sissel can wind time back to four minutes before to their death.

These two mechanics set up a genuinely unique and exciting approach for what is, at its core, a puzzle game. Sissel has until sunrise to figure out who he was and why he was killed, but to do this, he finds himself working with a host of colorful characters – most of whom are unknowingly relying on Sissel to actively prevent tragedies as they strike. You can change someone’s fate, and that’s a powerful bargaining tool.

This plays out in a series of increasingly clever and elaborate setups in which you use your powers to do good, and each puzzle feels like you’re building a Rube Goldberg machine. They can be deviously difficult, but a lot of care has gone into constructing these scenarios – there are always enough clues, nudges, and things to experiment with to put the answer within arm’s reach. Your success, however, will rely on your ability to think outside-the-box. There’s a logic to everything, but that logic is often not immediately apparent.

Now, if Ghost Trick were nothing but a collection of puzzles, it would have been a great game. However, that’s just a piece of what’s on offer here. The real stars are the story and the characters. The game does a careful balancing act between light and dark moments – it’s often dark without becoming overly morbid and morose, and just as often it lifts the tension with a good-natured sense of humor that is often hysterically biting without breaking the tone of a scene. In all honesty, though this is a big claim, I’d say it’s written far better than your average novel tends to be. It’s compelling stuff, even if it does feel the need to recap events far more often than is necessary.

But the writing is just a part of what makes these characters and their stories so special – the art design really pushes the whole package into the stratosphere. Unlike Ace Attorney’s reliance on talking heads, everything in Ghost Trick plays out more like an (actually) interactive cartoon. I’m not sure if the characters are stylized real-time 3D models or if they’re carefully rotoscoped 2D sprites, but how ever the look is achieved, it’s stunning in motion. The fluidity of the animation on even the most incidental of details here is something you don’t generally see in most modern 2D games, let alone one on a 15-year-old handheld. Everyone is immediately identifiable by their personal mannerisms and gestures, and it makes them all so much more memorable and more human than the photo-realistic character models most mainstream games tend to strive for. The sound is great as well: the game lacks any sort of voice acting besides a few grunts and yells, but the music is easily a match for the similarly-styled tunes from the Ace Attorney games.

I cannot speak highly enough for Ghost Trick. It’s a brilliantly conceived game that defies convention, and one that deserved much more credit than it ever received.
_
No cheats were used during the recording of this video.

NintendoComplete ( punches you in the face with in-depth reviews, screenshot archives, and music from classic 8-bit NES games!